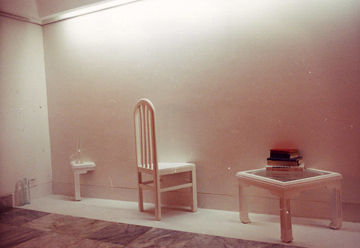 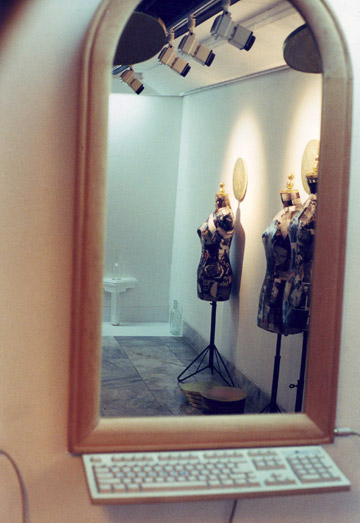 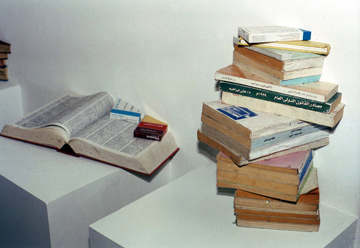 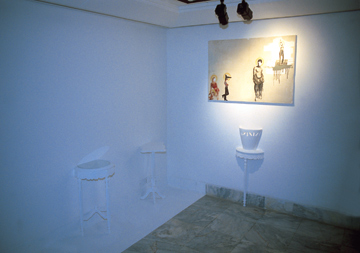 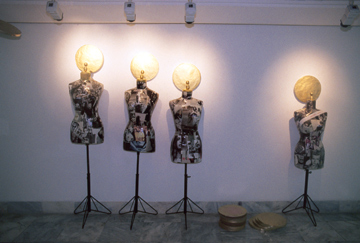 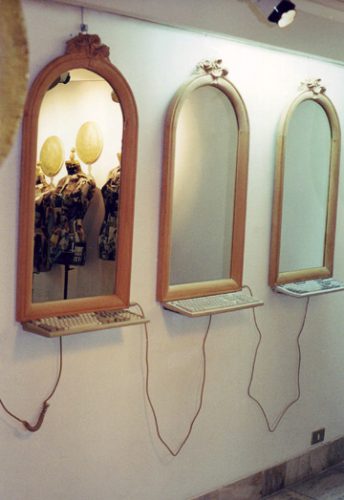 Halfway Home and the Electronic Gods, 1999

Concept
Halfway home & the Electronic Gods are two “flexible” site-specific installations that can be installed alone or together according to the exhibition space. All the installation elements are rearranged according to space allocated.
Both installations explore the relationship between elements of the sacred and those of the consumption culture.

Halfway Home: for this installation, the chairs and tables were sawn obliquely and attached to the walls prior to painting the walls. The final effect gives an impression as if the wall in a process of swallowing the furniture. I wanted to probe the notion of the past that swallows the present. My principal inspiration was media-propagated chain of talk shows that came with the early years of satellite cable introduction in Egypt, where extremist and fundamentalist religious clerics gained access to every home through the TV cable enabled screens, brainwashing the younger generations, from which came the culprits of several violent incidents in Egypt from 1995 to 1999. Such shows were concurrent with a flux of self-published booklets and manuals that seemed to promote ideas of fundamentalism and regressive centuries-old conservative thought.   The installation proposed an alternative time-space continuum that was like an exercise: what if the past comes back to swallow the present? Will there be a future? Are regressive and retarded streams of thought swallowing our attempts for progression and modernity?

Electronic Gods: four keyboards were attached to four framed mirrors. The installation was an exercise in contemporary behaviour, where keyboards usually invite viewers to touch. Four carton circles covered in gold leaf resembled haloes; those dangled from the ceiling in front of the mirrors. The viewer after touching the keyboard would look at the mirror in front of her/him, to find their face surrounded by a golden halo. The idea is that every person can be a saint at the push of a button.
The inspiration for the installation was the new phenomenon of adopting marketing techniques by fundamentalists and extremists to promote their thought; hundreds of religious products: books, CDs, cassettes, DVDs and other material, all digital, all electronic and can be purchased at a click of a button.