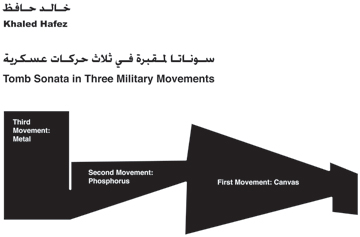 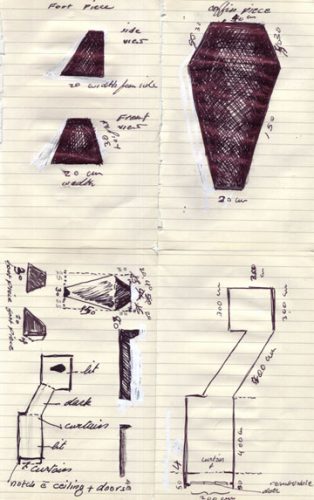 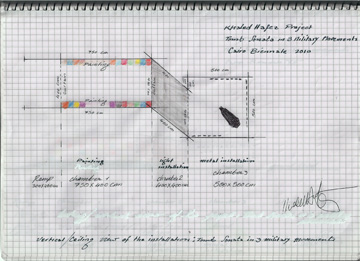 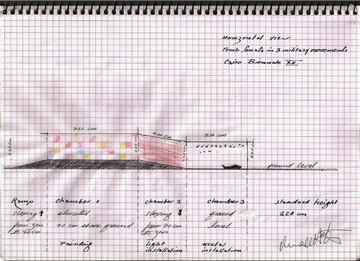 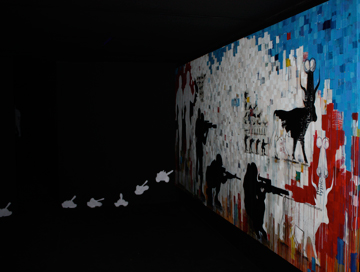 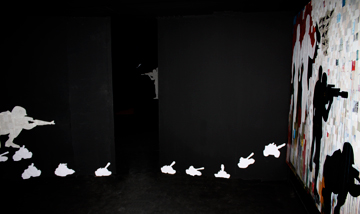 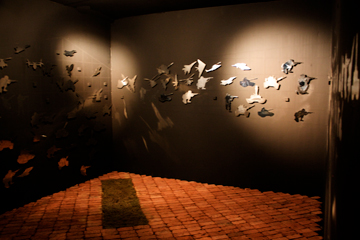 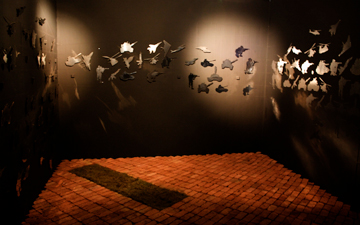 Tomb Sonata in Three Military Movements (and Overture) is a project that explores and proposes a series of concepts that I explored for the past 7 years. I am constantly attempting to hybridize visual language accessible to both Eastern and Western audiences, break barriers between past and present, a language that transcends geography and –at another level– time.

Tomb Sonata in Three Military Movements (and Overture) is a constructed alternative space, a tomb that isolates the viewer from the real to a hyperreal state reminiscent of Jean Baudrillard’s work on simulation and simulacra. The constructed space takes reference from the ancient tomb as a tool for documentation and recounting the times and lives of certain societies, as well as its ancient sacred significance of death as a phase for eternal life.

A visual assemblage of silhouette derived from media-propagated imagery of war, violence as well as contemporary advertising iconography counts on the visual memory of the viewer to draw juxtaposition with ancient Egyptian ideograms, pictographs and petroglyphs. The selected silhouettes are extracted form images of military strife and struggle for wealth and power that shattered the Middle East region for decades.

0. The Overture (Entrance)
Simulation of getting in and out of an archeological site, the small entrance takes the viewer from light to black light, from outside to the inside.
The overture is inspired by Samuel Barber’s seminal work Adagio for Strings, where, through a repeated melody motif poses questions more than it provides answers. The short passage of almost total darkness choreographs the viewer to the first movement: Canvas.

1. The First Movement: Canvas(Room 1)
In Canvas, large size paintings (750 x 250 cm and 450 x 200 cm) of human elements appear in full gear, combat-positions, life-size and minute, with migrating humans and animals from one side of the wall to the other –in the manner of flat graphic ancient painting–, to escape from the canvas to the wall and into the second room. This consistently horizontal movement –to me-represents forced migration, and consequently shifting identities. The room is pitch black, and the black ultraviolet light renders only white areas surfaces visible, in a way that demolishes the aesthetics of painting, to let the viewer see only the information: codes and symbols.

2. The Second Movement: Phosphorus(Room 2)
In Phosphorus, another completely dark room lit by ultraviolet black light, with large and small flat forms of tanks, snipers or combatant fighters all glow in the dark. The silhouettes assume the same horizontal movement. Phosphorus movement represents mass-induced fear, collective conscience, the killer and the kill. The selected forms and their arrangement are inspired from ancient alphabets.

3. The Third Movement: Metal (Room 3)
InMetal, the hieroglyph-like alphabets cut in polished stainless steal, arranged on three of the four walls in an interrupted manner. Metal represents war machines, industrialization, the writing of history that is always dictated by the vanquisher; the defeated has no place on those permanent walls. The space –a finale for the tomb dwell—proposes sacred elements of life and death.