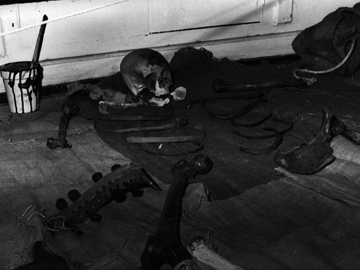 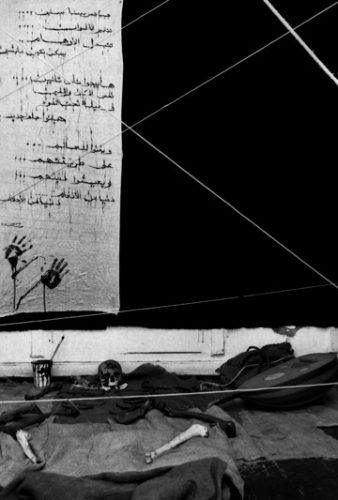 Concept
Prisoner of Freedom is an installation that accompanied a series of painting and an exhibition all with the same title.
The skeleton is placed on old fabric, with a bucket full of black ink touching the wall. A text is written on the wall, barely legible. The entry door to the small room is blocked by ropes from one side to the other and from up to down. The viewer is forced to watch from outside across the ropes. The writing on the wall is legible enough to give an impression that whoever was alive one day, imprisoned in the installation space, attempted to break free and ended by landing in a similar prison.

The inspiration of the piece came after a public discourse in the late eighties about the crisis in identity that faced the regular layman at the time. The discourse was instigated by a phenomenon of Egyptian brain drain amongst the younger generation. Thousands drained every year, mostly illegal, either to the West, to work illegally without protection or rights in host communities. They become prisoners of the new promised freedom. There seemed to be another flight and drain within the society: many lived in self-created communities away from all public spheres; virtual prisoners of their time.

Though the work takes an overtly literal approach, and almost undermines the metaphorical, the installation does not attempt to provide any answer, only questions: what it is to have an identity in one place? Is freedom relative? Is freedom space, or time or a state? In the quest to attain freedom, is there really a result?