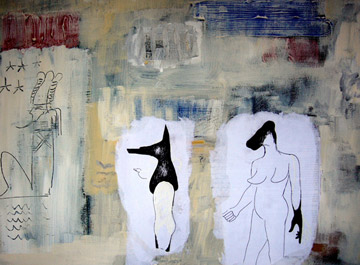 The artist’s obsession with continuities and relationships between present and past becomes more explicit than in the earlier work. Local heroes, ancient gods and goddesses, stylized snipers, prisoners and decapitators are layered along with textual references on the textured surface of the canvases.
Locating his discourse within the framework of heroes and gods, Hafez proceeds to sketch out various processes of becoming human – animal – god and its manifestations in the collective consciousness. His iconic depictions, at once ancient and contemporary, raise questions about the quest for immortality and the making of myth in a given cultural context.

Identity is a recurrent theme in the work of Khaled Hafez, a notion he does not attempt to insert in a unique reality, but rather uses in multiple juxtapositions to explore a combination of multiple visual elements. The work acts as a witness to the cumulative cultures inherited by the artist across time, cultures that occupy his visual universe and demonstrate numerous levels of cultural and aesthetic references.

From ancient Egyptian iconography, the artist borrows figuration of ideograms where Gods like Anubis, God of the cemeteries/mummification/underworld, Sekhmet the Goddess of ferocity and Nute, Goddess of the night skies recount stories of ideal universes where only the elite can dwell.

In France of the avant-garde and visual revolution, the artist retains a minimalist taste and pays tribute to conceptual/minimalist culture in several of his projects. While in our modern world of TV screens Hafez borrows/adopts a zapping behavior, juxtaposing images of soccer, American mythology (Batman), televised world news tragedies with icons of consumerism and mythological Gods.

Snipers parading over the surfaces evoke civil and regional conflicts as well as imperial interventions that affect inevitably the Arabo-Islamic world, both contributing to an impending Orient-Occident rupture.

Intersecting in interests and resembling each other, both worlds (East and West) are confronted by the similar threats of civil conflicts and other modern neighbor-violence in different forms, ignited by cultural nationalism and fatal maneuvers aiming at enforcing a unique political and cultural identity hostile to any diversity.

In the work of Khaled Hafez the viewer perceives aspects of an identity characterized by plurality and cultural wealth; the female figure of the African prisoner that appears constantly in several works insinuates a repositioning of Egypt as part of the African heritage. The figure’s nudity in ombres chinoises (Chinese shadows) overtly evokes an air of femininity, opposed by the figure’s attached arms that raise questions about liberty, questions evoked since the early days of history.

Through his navigation of the diversified identities of millennium Egypt, be it national, regional, and/or Arab, Hafez explores the different elements of his everyday visual culture and produces an original body of work that comprises an aesthetic of certain specificity; a specificity that, far from being definitive, reminds us that identity is a cumulative built up of various influences and components that surpasses any one unique definition, be it religious, cultural or even more, political.

The work also draws the attention of the viewer to cultural hybridity in the creative production of artists.