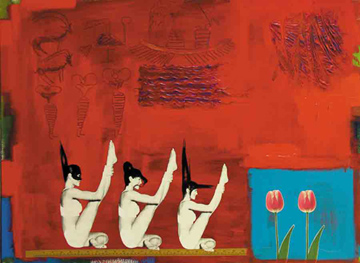 The effect of the parabolic satellite culture dominated by Western/American media and advertising in the last two decades is undeniably omnipresent today, and for the past two decades, in the everyday behavior of societies of the middle East.

The new ferocious audio-visual material of the budding consumer goods mass culture propelled the previously slowly-progressive societies of the Middle East into a global visual culture that led to a dramatic confusion of identities, especially among the young, and a state of cultural ambivalence of love-hate towards the West.

Contrary to the gloomy picture described in a media dominated by a massive imagery of new “war aesthetics” and now-taken-for-granted “aesthetics of violence”, the confrontation/juxtaposition between the established, near-sacred, values and the newly “penetrating” consumer goods behavior change resulted not only in terms like “collision of cultures”, but also a new and interesting artistic expression by the local artists, carrying an amalgam of East-West visual alphabets of a strong hybrid nature that attempts to probe new values of visual nature capable of bridging and understanding the other.
For the past ten years I have been appropriating images of the consumer goods culture that taints the societies of the Middle East since the late seventies. The effect of the parabolic satellite culture dominated by Western/American media and advertising in the last two decades propelled the previously slowly progressive societies of the Middle East into a global visual culture that led to a dramatic confusion of identities, especially among the young, and a state of cultural ambivalence of love-hate towards the West.

Contrary to the gloomy picture described in a media dominated by a massive imagery of new “war aesthetics” and now-taken-for-granted “aesthetics of violence”, the confrontation/juxtaposition between the established, near-sacred, values and the newly “penetrating” consumer goods behavior change resulted not only in terms like “collision of cultures”, but also a new and interesting artistic expression by the local artists, carrying an amalgam of East-West visual alphabets of a strong hybrid nature that attempts to probe new values of visual nature capable of bridging and understanding the other.
Since the year 2000 I started using video as one of my tools of expressions; my first work, an experimental video collage entitled visions of a cheeseburger memory (2000,11 minutes, mini DV) probed the effect of the bombardment of the urban protagonist by film and advertising images of the neo aesthetics of violence. In later works, things we always do (2002, 7 minutes, mini DV), Obsessive Compulsive Neurosis (2003, 5 minutes, mini DV) and Idlers’ Logic (2003, 24 minutes, mini DV, Dak’Art 2004 Francophonie prize) all my work probed the label of the identity of the Arab as terrorist until proved otherwise.

For my Fulbright Scholar proposal, I wanted to get back to in-depth image-making research of painterly nature; my project text is entitled interdisciplinary art approaches of contemporary nature as a tool for communication. I was trying in my research to find the roots for what we know now as effective and “impactful” art practices like installation, sound, assemblages, image appropriations and video/image installation. My research, that in fact started as early as the year 2000 in my Cairo studio never aimed at attaining particular results as much as it targeted continuous probing into the (to me) misnomer “ancient Egyptian art” and its impact on today’s visual culture.
In my Philadelphia studio at Pennsylvania Academy of Fine Arts, I started my project Philadelphia Chromosome, in which I worked with several intersecting concepts:
Time: past and present, since in most research involving the notion of time, focus is always on the differences. I have, for years been looking for the anti-difference (not just similarities),
The Super-hero: across time, every civilization looked for the imaginary super-hero for protection against evil forces, from ancient Anubis to modern Batman
Continuous cultural recycling: that combines both time and the superhero as well as ideas, faith and beliefs
Metamorphosis: and the continuous movement of states (like physical forms) and ideas (like terrorism) from one form to the other
Kinetic versus static

Sacred versus consumable; at all levels, from packaging religious ideas to sanctifying and/or selling the human body
My principal benchmark in my visual research for the past few years has been ancient Egyptian painting. Here I get back to why I personally believe that the term ancient Egyptian art is a misnomer; I believe the term is too global and describes all art as artifacts, while the principal function of each discipline/form was entirely specific and functionally different from other forms.

Ancient Egyptian sculpture is perfectly three-dimensional; the two schools described by archeologists and art historians are the idealist school that sustained for over 3000 years, where all the pieces were initially inspired from their models, but all physical (body) deformities are eliminated or corrected to render the sculpture ideal according to certain preset specifications; on the other hand, the realist school of the Amarna period at the city of Akhetaten (horizon-of-aten, capital of Akhenaten, tell el Amarna, Minia, 400 Km south of Cairo) that survived anything between 28 and 80 years, worked with the physical imperfections of models to render the work more human and realistic.

In both cases, the sculpture had the apparent function of symbolizing God-King, in a static pose, with limbs close to the body to minimize damage through time.
But the principal function of sculpture is/was to be part of the temple, where architecture, sculpture, sound and light inflict different emotional states into worshipers, temple goers or..viewers.

This, in my personal opinion, is what became in the twentieth century known and defined as installation, and interdisciplinary site-specific art practices.
On the other hand ancient Egyptian painting served another function totally; if we examine the perfectly three dimensional sculpture and compare it to the very two dimensional painting, we are confronted by a question: were the artists who made those massive site-specific public art sculpture/projects incapable of using theories of shadow and light, composition and create more sophisticated rules for a more realist painting?
Answer is quite simple: we need to look for the function of the artwork; in my personal opinion the main purpose of painting is not the simple aesthetics. In fact painting was kept two dimensional so as not to fall in the trap of appraisal of aesthetics.
The painting serves the function of narration, weather reality or fiction, and documentation of factual or value/belief-based events.

The two-dimensional painting did not change or develop much over three millennia, and always respected the same/initially set rules; they were descriptive, there was a narrative, they were always kinetic where figures moved from right to left or vice versa, never in opposite directions unless for decorative reasons, always following rigorous rules of expression: for confirmation and accentuation the figures were repeated several times in succession, and always there was descriptive text.
This combination of text and two dimensional graphic drawing is what we know today as comic strips, and the kinetic aspect of the figures gave birth to today’s film footage; the whole narrative is propaganda, advertising or documentary work.

Perhaps (subjective opinion) to defy the damage of time as well as to represent psychological facets of the humane, the resolution to metamorphosis found its way in the extremely graphic lay-outs; especially the metamorphosis of the feminine that almost always signified life: Bastet the cat (domestication) metamorphosis into Sekhmet (the ferocious) then into Hat-hor (maternity, bounty) then into Iset the sensual woman (known today in Greco-roman language as Isis); the metamorphosis is not just physical, but also emotional and psychological and according to the role played.

In both art practices, painting and sculpture, the human figure was indispensable; the body was sanctified, beatified, created to certain specifications of perfection worthy of worship; all goods were perfect female and male figures headed by the either powerful or generous animals: jackal, lioness, cat, falcon, cow, crocodile etc.

In the process of image-making I probe distance and time, while looking for witty solutions rather than the more comfortable aesthetic results: I look for the anti-difference in visual alphabets between East and West; when one day I was looking at a small stone model of Anubis and a Warner Brothers model of Batman of almost the same size, I discovered that both figures are identical from the front view and from the back view; the only difference is from the profile view. It is a bit astounding that both super-heroes of past and of present have, beside their morphological resemblance, an identical function of protection against evil forces.

In my canvases I try to examine the lay out (not standard composition) of ancient painting to create a narrative that combines my vision in recycling stereotypes, symbols, patterns, superheroes, time and ideas.
The walking or running figures move from one side of the canvas to the other; many times subtle changes occur in the figures, like a mask transformation from Anubis to batman, from Bastet (the cat-headed female, goddess of domestication and the meek) to the superhero cat-woman to Sekhmet (lioness headed female, goddess of the ferocious).
The repetition of moving forms creates a sense of movement and when associated with the subtle change of form provides the required witty solution to the surface.

For the female figures in my mixed media work I use images extracted from advertising and from cheesy commercial tabloids, and for male figures I use bodybuilding magazines. The images are enlarged archival color and black and white photocopies and silk-screen prints.
The choice of the image reflects always the perfection of body proportions, a criteria used in all Mediterranean mythology, and a trait that does not represent a significant proportion of ANY population; this provides for my desire to mingle fiction with reality.

The use of the flower symbol/image, represent beauty, perfection, regeneration and metamorphosis; in cases of roses and tulips, the use of images of roses and tulips carries a profane carnal/sensual reminiscence; both represent in the European/western mythology the counterpart of the lotus flower/plant in eastern cultures, mythology and religions.
In my work, and in the work of other Egyptian contemporary image makers, the use of déjà vu motifs like lotus is avoided because it eliminates the esotericism and renders the image too rhetoric or accessible.

The use of red tulips/roses to evoke both a spiritual/romantic, near- sacred memories, as well as a carnal/commercial mood, comprehensible to viewers by today’s post-MTV, post-film and post CNN culture. After all, the rose is related to Aphrodite (Venus), born from cupid smiles and fell from Aurora’s hair during combing.

The use of other flowers of more Egyptian nature like the Sunflower and Paradise Bird represent in ancient mythology the process of metamorphoses, continuity of life, eternity, creation and the never-ending. The influence of Akhenaten’s religion/art of the Sun is omnipresent in my work. Footnotes